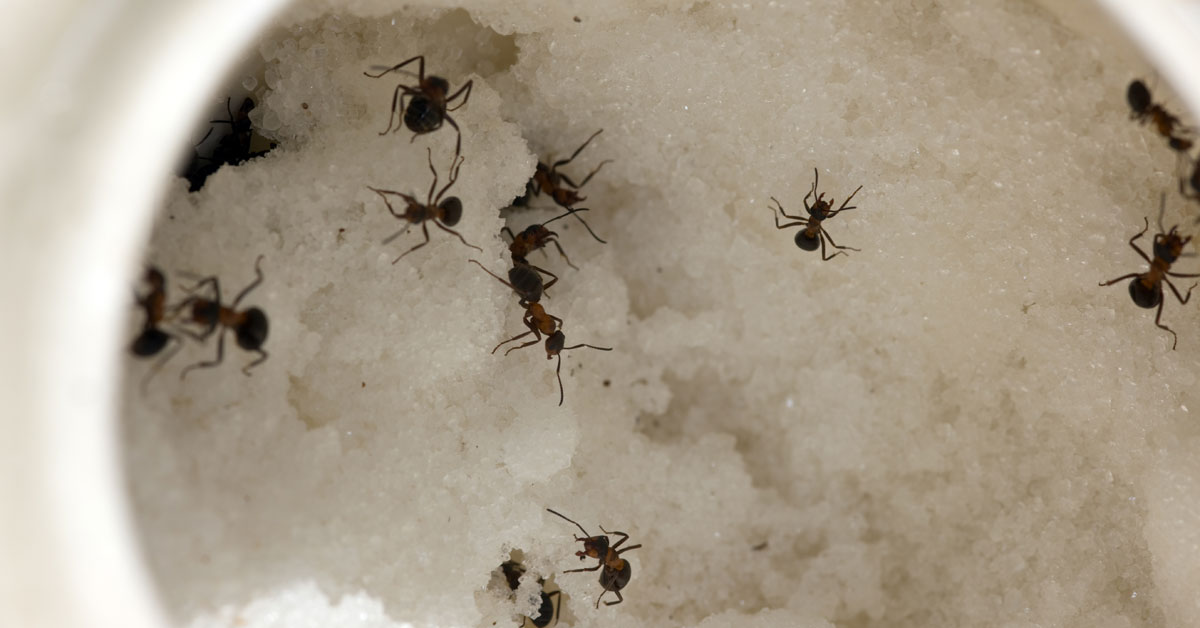 Sugar ants are those pesky little black ants that swarm your kitchen and bathroom and generally drive you crazy. They are not destructive like their larger carpenter ant cousins, but they are twice as hard to get rid of. What makes them so tricky is that there are so many things that you can do to make them worse!

For example, if you were to walk down the pesticide aisle at a department, you would see several cans and bottles of ant spray with pictures of the same ant that you are dealing with on them. But, did you know that all of those sprays will make your problem worse?  This is because a sugar ant reacts differently to repellents (and all the sprays that you see are repellents) than other pests. Repellents cause panic in the nest, and it sets off a process called “budding,” where the colony will move and split. So, your problem that was just in the kitchen is now in the bathroom, bedroom, and living room as well.

If Ant Spray Doesn’t Work, What Can I Do?

While it is true that the ant sprays are going to be counterproductive, the bait products at the store will be helpful. Maybe you have tried gobs of Terro (the most popular over the counter ant bait), and it didn’t work at all. Well, that is because you didn’t do it right. Here is the do-it-yourself technique that gives you the best chance of getting rid of those pesky ants once and for all.

This Is Going To Sound Crazy, But.

First, what would happen if you spilled maple syrup on your floor? That’s right! You would have ants swarming over every last drop of the stuff, right? This sounds crazy, but take a small tray (maybe like the lid from a jar) and fill it with syrup or something really sweet. Put this sugary stuff in a less prominent place, like in the pantry or under the sink. What happens next is just what you would expect, every ant in your home is swarming the stuff, and you will see a superhighway forming heading from the nest to the feeding trough. Give this a couple of days and then swap the syrup with Terro or some other store-bought baits. Now, these baits will not work nearly as well as some of the stuff a pest control company carries, but this will give you the absolute best shot to get rid of your ant problem. Go ahead and give it a try, and if you still need help after that, be sure to give me a call.

How To Make Sure Carpenter Ants Aren’t Wrecking Your Home
|
What Are These Bugs Covering My House?